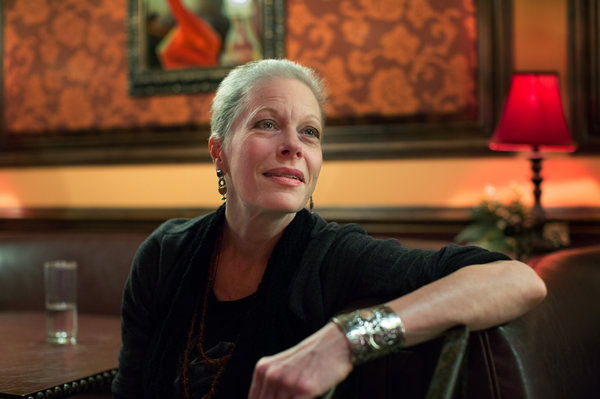 Marin Mazzie at Feinstein’s/54 Below. By LAURA COLLINS-HUGHES December 30, 2015

Flash back to last New Year’s Eve, and there was the Broadway star Marin Mazzie in a form-fitting black ball gown, on her way to see “The Merry Widow” at the Metropolitan Opera. With thick blond tresses cascading past her shoulders, she was the picture of glamour, posing with her husband, the actor Jason Danieley, his arm around her waist.

A year later, she is a changed woman: her silver hair short and chic, her elegant cheekbones more pronounced, her mind more intent on living in the moment than it used to be. Given a diagnosis of ovarian cancer in early May, when she was playing the Leader in the Encores! production of “Zorba!,” Ms. Mazzie, 55, has spent much of 2015 focused on healing.

Yet she’s barely been gone from the stage. This New Year’s Eve will find her reprising her solo show “Make Your Own Kind of Music” in a sold-out engagement at Feinstein’s/54 Below. That’s where she was on Monday afternoon, settled into a banquette, radiating optimism and a restless energy. She laughed often as she spoke about the year…

Finding the Meaning of Death in a Concert Hall