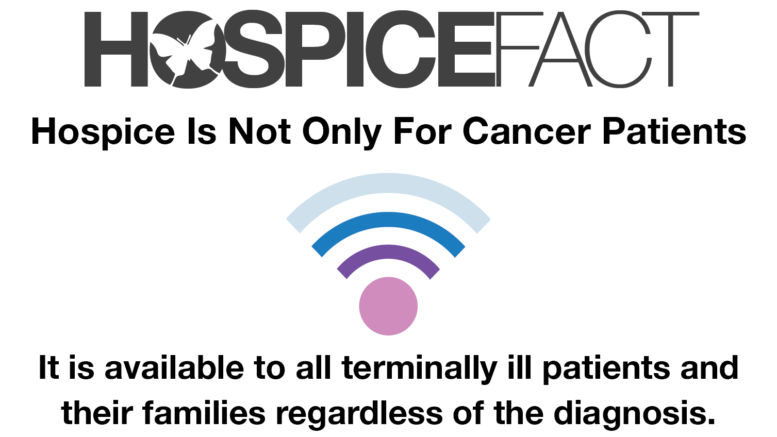 Hospice is not only for cancer patients. It is available to all terminally ill patients and their families regardless of the diagnosis.

Hospice is traditionally for people whose life expectancy is six months or less regardless of the diagnosis. In fact, other than cancer, hospice is most used by those who suffered from congestive heart failure, dementia, chronic lung disease, failure to thrive, diseases of the circulatory system, infectious and parasitic diseases which includes human immunodeficiency virus (HIV), diseases of the nervous system and sense organs, including Alzheimer’s, Parkinson’s, meningitis, and diseases of the respiratory system and other conditions.

According to a 2012 report by the NHPCO, “When hospice care in the United States was established in the 1970s, cancer patients made up the largest percentage of hospice admissions. Today, cancer diagnoses account for less than half of all hospice admissions (37 .7%)1. Currently, less than 25 percent of U.S. deaths are now caused by cancer, with the majority of deaths due to other terminal diseases.”

But this doesn’t mean that hospice will only be provided for six months. Hospice can be provided as long as the patient’s hospice care team and doctor certify that the condition remains life limiting.

For those nearing end of life, a team of health care professionals provides hospice care services in order to maximize comfort for the patient, reducing stress and pain while also addressing psychological and spiritual needs. Enrolling in hospice may help a patient live better, more comfortable, and longer.

The main goal of hospice care is not to cure the disease, but to support the highest quality of life possible for whatever time remains.

Hospice Payment Reforms Are A Modest Step Forward, But More Changes Are Needed