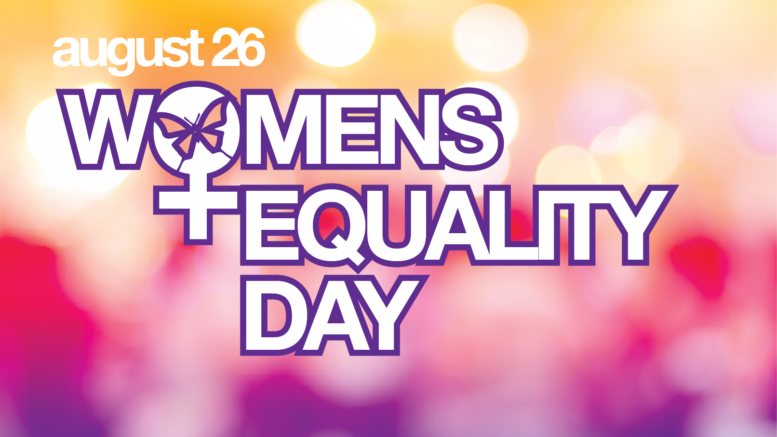 On August 26, 1920 the certification of the 19th Amendment to the Constitution granted women the right to vote. Fifty years later on August 26,1970, feminists organized a protest with over 100,000 women to campaign for equality in education, employment and childcare. Exactly one year later in 1971, the United States Congress designated August 26th as “Women’s Equality Day.”

Joint Resolution of Congress, 1971 Designating August 26 of each year as Women’s Equality Day:

WHEREAS, the women of the United States have united to assure that these rights and privileges are available to all citizens equally regardless of sex;

WHEREAS, the women of the United States have designated August 26, the anniversary date of the passage of the Nineteenth Amendment, as symbol of the continued fight for equal rights: and

WHEREAS, the women of United States are to be commended and supported in their organizations and activities,

NOW, THEREFORE, BE IT RESOLVED, the Senate and House of Representatives of the United States of America in Congress assembled, that August 26 of each year is designated as “Women’s Equality Day,” and the President is authorized and requested to issue a proclamation annually in commemoration of that day in 1920, on which the women of America were first given the right to vote, and that day in 1970, on which a nationwide demonstration for women’s rights took place.

Women’s’ Equality Day is observed not only to commemorate the passage of the 19th Amendment, but it also calls attention to women’s continuing efforts towards full equality. Currently, many public facilities, organizations, and workplaces participate in Women’s Equality Day programs including displays, videos and other activities.

Today there is an effort to make Women’s Equality Day a federal holiday. According to nationalwomensequalityday.com “This petition is an effort to further recognize the importance of this day to not only make sure that it is enriched in history lessons but that it deemed important enough to take precedence as a federal holiday. By recognizing this day as federally important, we will be commemorating and celebrating the efforts of the women that have come before us as pioneers and activists who sought the need for women’s social and political mobility. Also, it an effort to keep the torch burning so that women and girls can live in a society that see and treat them as equals.”

You can visit www.nationalwomensequalityday.com for future news and updates on this petition.