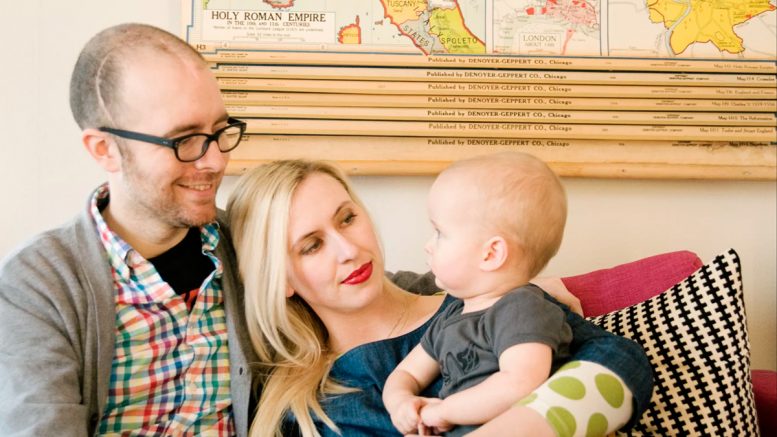 Courtesy of Nora McInerny via Vox

What would we have done if he’d gotten sick in an America where the AHCA was the law of the land?

Aaron and I had been dating a year when my phone rang at work — his co-worker wanted to know if Aaron had ever had a seizure. I said something along the lines of, “Of course not! Who has seizures?” and rushed to the hospital to meet his ambulance. Aaron seemed fine, but the doctors weren’t so convinced, and soon I was pushing him in a wheelchair down to an MRI machine, where doctors took pictures of Aaron’s brain and I took pictures of him in an MRI machine for Instagram. The results were some mediocre social media content and a giant brain tumor that needed to come out immediately. The brain tumor was stage IV cancer.

It was 2011, a year after the Affordable Care Act passed.

Three years later, Aaron died in my arms of brain cancer at age 35, leaving me a widowed mother to our young son, and you know what I think? I think we were lucky.

The first night in the hospital, Aaron whispered in the dark, “How will we pay for this? How much will this cost?” He had a giant, cancerous tumor growing in his brain and his main concern was how to pay for it. “Don’t worry,” I told him, “it will all work out.” But I didn’t think it would. I had no experience with illness beyond the occasional ear infection. I had no idea how much brain cancer would cost, or how we would pay for it.

Everyone loves an inspirational cancer story. We call them “cancer journeys” or even better, “cancer battles.” We cheer people on while they fight, we cry for them when they lose. These stories inspire us. They move us. And they’re always something that happens to someone else, until that someone else is you.

I would know, because I lived one of these inspirational cancer stories for three years.

People know me for this reason. Because I wrote a blog about Aaron’s brain cancer, and then he and I wrote his obituary together, and that went viral, and then I wrote a book about loving him and losing him to cancer, and now I host a podcast that aims to help everyone talk about all kinds of awful life stuff. I’m not a person who will tell you that everything happens for a reason, or that the key to suffering is to turn your lemons into lemonade. My work is meant to help everyone acknowledge that hard things are hard, that we all go through them, and to create opportunities for us to actually talk about these things.

If you’ve gone through something difficult — or might someday — I’m your one-stop-shop for a little encouragement.

I’m glad that people find my work inspirational, and that I have been able to create some sense of purpose from the wreckage of the life I had with Aaron. Inspirational is easy. Much easier than the political, especially on the internet, where there is always some guy with a screen name like ObamaSux99 making incredible logical leaps from healthcare to sharia law on a post about your favorite mascara. But there is no denying that my family’s inspirational story is also a political story, and the Republican’s American Health Care Act proves it.

When Aaron got diagnosed, he and I were two moderately successful young advertising professionals, but like many Americans, we didn’t have $500 to cover an emergency, and let me assure you that medical emergencies are always more than $500. We could have saved every cent we earned in an HSA and not have come close to covering the cost of two brain surgeries, a year of oral chemotherapy, two 30-day rounds of radiation, and 10 months of hospitalization for intravenous chemotherapy treatments.

Aaron’s brain surgeries and the subsequent hospitalizations while he recovered from having his head sawed open had a sticker price of nearly $200,000 each time. The nausea patches he needed to keep food down during chemo were about $600 a pop before insurance. I stopped opening anything that looked like it might be a Statement of Benefits, because when a medical procedure costs more than your house is worth, the idea of being able to pay it back is laughable. And by laughable, I mean it will crush your spirit.

We hadn’t planned for a terminal illness in our 30s, and I’m sure there will be plenty of trolls with lots of opinions about that! We hadn’t planned for it, we didn’t have the money for it, but Aaron had a great job with a wonderful employer, and he had health insurance.

How would we have paid for it without insurance, without an employer who saw him as a human, who kept him employed even when his brain cancer started to gnaw away at his mental and physical capabilities, when he needed me to button his shirts and pick him up from work by 2:30 pm, so he could sleep off the effects of his treatment?

What would we have done if his brain cancer had revealed itself in an America where the AHCA was the law of the land — an America where insurers can once again impose annual and lifetime limits on health care coverage? Before Obamacare, many Americans had plans with limits at 1 or 2 million dollars — meaning that once they went over that amount, their benefits expired.

What would we have done once Aaron’s bills blew past that limit, as they certainly would have had he been a candidate for another brain surgery, or another round of radiation? My guesses are twofold: I’d have put him on an ice floe on one of the 10,000 lakes in Minnesota, or shot a burning arrow into a raft as he floated down the Mississippi.

It didn’t come to that, because we were the lucky ones.

We were lucky because his insurance covered brain surgeries that cost more than our house was worth. We were lucky because despite his good insurance and our good jobs, we were still in a financial free fall — the bills for Aaron’s treatment and the birth of our son were still sizeable, even with good insurance –— so our friends and family and perfect strangers crowdfunded a cushion for us to land on. That money paid for a home health aide to assist me in Aaron’s constant care at the end of his life. It paid off the persistent medical bills I’d have never been able to cover on my own and helped pay the mortgage.

We were lucky because if Aaron had survived that impossible-to-survive kind of cancer, he’d have been living with a preexisting condition that Republicans decided was not worth protecting.

One of the conditions of being born human is inhabiting these weird, fragile little bodies of ours. I say weird because why do men have nipples and why do we all still have toenails and also why do these vulnerable little habitats of ours sometimes turn on us? Why are our bodies born with holes in their hearts or whip up a deadly cancer out of nowhere?

These human conditions should not be what bankrupts us, what ruins us financially after decimating us physically and mentally. But they do. Take a cruise through any of the popular crowdfunding sites and you’ll see families whose fundraising thermometers have barely budged, whose friends and families don’t have the resources to create a financial safety net for them.

Before Aaron was diagnosed with brain cancer, I was living a charmed life where only the very old people in my life had ever had cancer, where stories like mine were things that had happened to a friend of a friend of a friend. I pitied them, I possibly threw a prayer their way, and then I moved on. I was living in a sweet little bubble, the kind that Paul Ryan and his buds and everyone who says “Hey, don’t worry, it won’t be worse than Obamacare!” must be living in. A world where preexisting conditions are just things that happen to other people. Bad people. People who kinda deserve it, because they smoked or cheated the carpool lane or had it coming to them one way or the other.

One of the conditions of living in a society and a country is that we take care of one another. I pay for roads and bridges I’ll never drive on, and schools my kids haven’t attended. I pay for Paul Ryan’s insurance, so he can get a brain transplant or a medical intervention that will help his little shriveled up Grinch heart grow two more sizes. My best friend Elizabeth Warren said about the AHCA, “Tragedy doesn’t ask who you voted for.” She’s right. Tragedy doesn’t care. It doesn’t care if you’re ready for it, or whether you deserve it or if or how you’ll get through it.

My family’s story isn’t inspiring because it had a happy ending. It is inspiring because before Aaron died of cancer, he got to be alive. He got to get married and become a father. He got the treatment he needed to live three good years with one awful disease. Because the blog I wrote wasn’t about cancer, but about the life we shared together. It was a love story, not a cancer story.

All that was only possible because of the political reality of that time, a reality I see being threatened for many friends and strangers living through their own health issues. I’ve been called an alarmist and a crybaby and a bleeding heart and yep, I sure am. Tragedy doesn’t care who you voted for or what you believe or whether you’ve saved enough money in an HSA to cover a couple brain surgeries.

But we can care. Even when it’s not our tragedy. Because someday, it will be.

Nora McInerny is the author of It’s Okay To Laugh (Crying is Cool, Too) and the host of the American Public Media podcast Terrible, Thanks for Asking. She founded the nonprofit Still Kickin in honor of her late husband, Aaron Purmort.

Hospice Is About Living